On September 4, 2018, before the arrival of the third “Charity Day”, Secretary of the Party Committee and Secretary General of CCF, Bian Zhiwei delivered a speech entitled “Respond to the appeal of the CCPCC to help poverty-stricken people and contribute to fight against poverty”. Mr. Bian, on behalf of CCF, appeals to stay to the mission, aim at targeted poverty reduction, fighting against poverty to win the battle and build a well-off society. In his speech, Mr. Bian recalled the struggles of the Communist Party of China and the historical achievements made since the reform and opening up, especially under the leadership of the Party Central Committee with Comrade Xi Jinping as the core; in combination with the real circumstance of the China Charity Federation in the development of party building and charity work in recent years, especially in the fight against poverty, he proposes to strengthen the “four consciousness”, raise sense of responsibility, clarify responsibilities, spare no effort to pay more attention to the poor, focus on deep poverty-stricken areas and plays an active role in the tough battle for poverty reduction. 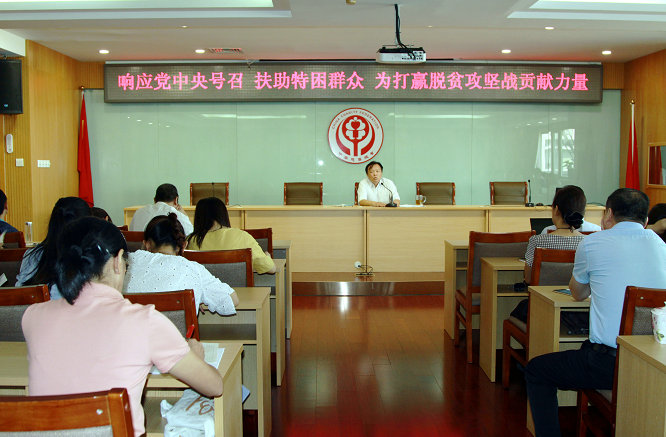 In the construction work of charity organization, CCF actively gives full play to the role of the trade union and women’s federation and other communities and organizes human and material resources to provide labor security, welfares in festivals and collective activities and protect employees’ rights and interests in an all-round way. Huang Shuxian, minister of the Ministry of Civil Affairs, spoke highly of the party development work in CCF and encouraged us to give full play to the role of social organization and charitable organizations in party work.

Social organization is an important carrier and channel for the party and government to contact and serve the people under the new situation. At present, China’s philanthropy is developing rapidly and healthily. The party and the government pay more and more attention to charity work, and the enthusiasm of all sectors of society to participate in charity is constantly rising. Under such circumstances, the China Charity Federation has clearly put forward the key work of strengthening party building as the core, promoting the efficient operation of various jobs as the benchmark, and carrying out party building throughout the charity work, and strives to achieve outstanding results in all work.